An orange sunrise peeked through the curtains of the camper so temptingly the next morning I was in agony waiting for Sven to wake up so I could get out and see it properly (there is no way to creep out of a camper). Luckily I didn’t have to wait too long and we were soon up, dressed and ready to explore. Our camper was parked within walking distance of the beach across a footbridge at the end of a riverside boardwalk frequented by herons, swifts and swallows.

A short hop across the dunes from there and the sights, sounds and smells of Lorne beach greeted us, beautiful in the early morning light. We joined the runners, walkers and people with their dogs already out and about despite the early hour. What a joy to live by the sea like this, I’d be there every day. Though maybe not quite swimming like one lady we saw, as the water was freezing and there were more stunning blue jellyfish littered here too. 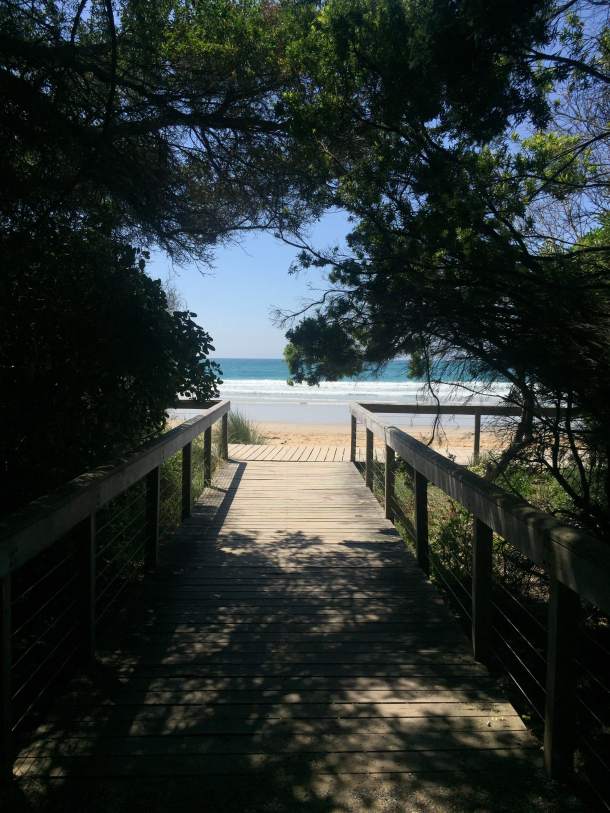 An hour or so here was enough to work up an appetite, but with a camper on your team you can take your meals on wheels anywhere you choose! An Aussie breakfast of smashed avo and tomatoes on bread (no one had the patience to fry toast!) with watermelon juice and coffee on the picnic tables in front of the bay followed. It seemed there’s endless places to picnic, or public BBQ sites along this road, all well signposted and used by tourists and locals alike. 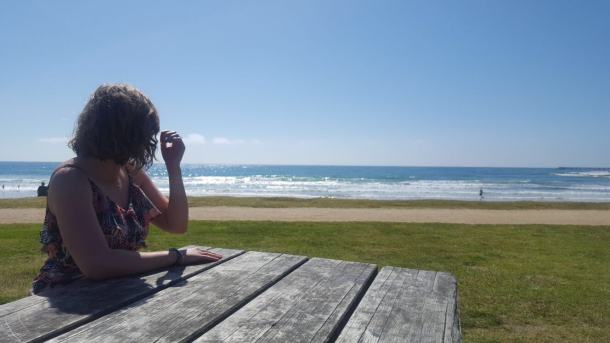 Time was ticking along, so after a quick stop to buy hats (when in Rome) we hit the road again. Having enjoyed the beach this morning we’d used up our waterfall time so decided instead to continue along the coast to Apollo Bay. What a coast! I was so jealous of Sven being able to lean out of the window and enjoy it without concentrating on the road. However with the current ongoing GOR restoration project creating roadworks every few kilometres I had plenty of opportunity to enjoy the view during traffic. Many of the signs were in Chinese as well as English as tourism increases. We later discovered this was also the reason for all the ‘Drive on the left in Australia’ signs we kept seeing around the place.

Stopping frequently to get out and stretch our legs at places like Sunshine Drive and Petticoat Creek it took most of the morning before we were parked up in the Paradise By the Sea that is Apollo Bay. At each stop we tested the water in the hope that it would be miraculously warmer than the last one and we could swim, but it was icy on the skin even in 30degree weather! Even the water from the creek was more than refreshing as Sven and I added to the piles of stones already standing there. Ours is the tallest, but also the most unstable…hmm.

We’d been advised by many friends and forums to stop at Apollo Bay, a seaside town with surfing and paddle board lessons and a number of beachy shops. But with so many tourists around it lacked the charm of Lorne so we only stopped long enough to enjoy an award winning ice cream and a stroll along the super soft sandy beach before rolling on into koala country! Dan had prewarned us that if you spy someone parked on the side of the road looking up, there’s probably a koala. So when not long after Apollo Bay we pulled up alongside a beautiful viewpoint on the right, and a couple under a tree on the left, it was worth pulling over. Sure enough there was a chubby fella stuffing his face with eucalyptus leaves. They’re quite spritely compared to the sleepy guys I met in the blue mountains, leaping from branch to branch at speed, but still taking the time to pose for a photo.

The drive to Otway lighthouse was one of the most fragrant I have ever enjoyed, as the air was filled with the scent of pine and eucalyptus. Sven craned his head left and right as we wound our way through miles of forest looking for more koalas, but as Julie had warned us of the need to be at camp sites prior to 6pm we didn’t have time for further stops.

Otway lighthouse is probably the one part of this tour I wish I’d researched. I’d expected a lighthouse, a stop which would take 30 minutes at most, but instead we found an extensive park with dinosaur fossils, aboriginal walks and historical tours and talks. I could have easily spent half a day speaking to the lighthouse keeper alone, and was more than disappointed to tear myself away from his stories. Sven on the other hand was fascinated by the wind speed, as it was more than blustery at the top. The keeper kindly demonstrated how to measure the wind using a little gauge, 48km…glad we left our hats inside!! However I can tick something else off my bucket list…climb a lighthouse, check!! 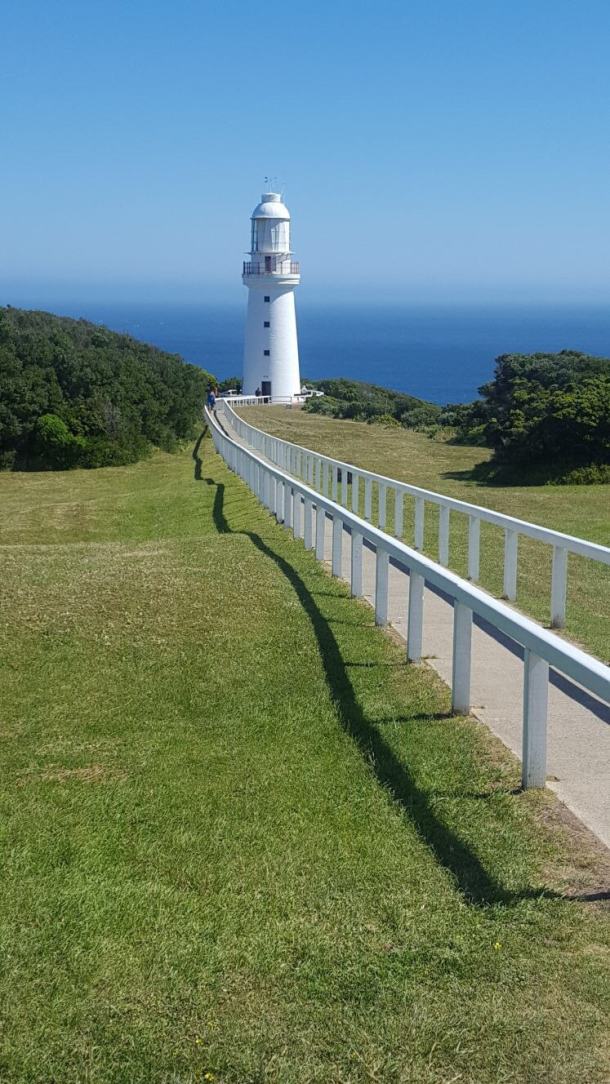 Despite thinking we’d planned a quite leisurely tour there have certainly been parts we’ve had to rush. Otway lighthouse and the Gibson Steps are two examples, and for the latter I also wish I’d thought to check tide times as the sea was rushing in when we arrived leaving little room for exploration. Being that we were pushed for time this was probably blessing in disguise, but I would have loved to have spent a few hours nestled under the towering cliffs, enjoying the first of the Apostles whilst protected from the wind. As sunset at the 12 Apostles is definitely one for the bucket list we found a cute little camp site in Princetown rather than press on to Port Campbell and checked in by 5pm (if only Julie could see our progress!) Visiting the GOR out of season has been fantastic for winging it, as camp sites and tourist spots are next to empty and we’ve had no troubles with crowds. This was particularly fortuitous at the Apostles, where we spent most of the evening meandering back and forth between viewpoints which would no doubt be packed to the rafters in high season. The view was stunning in all directions, I could have done with 3 tripods and eyes in the back of my head! 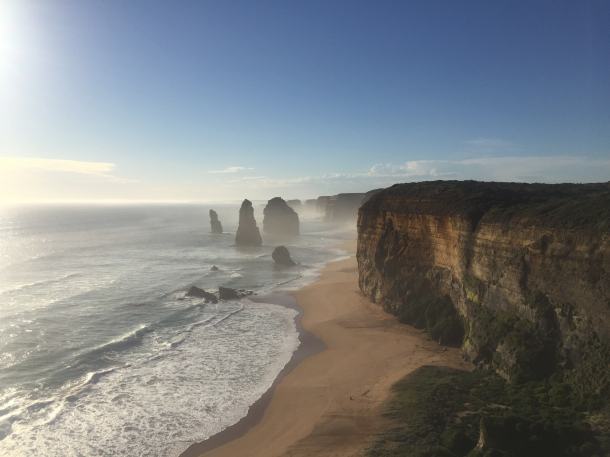 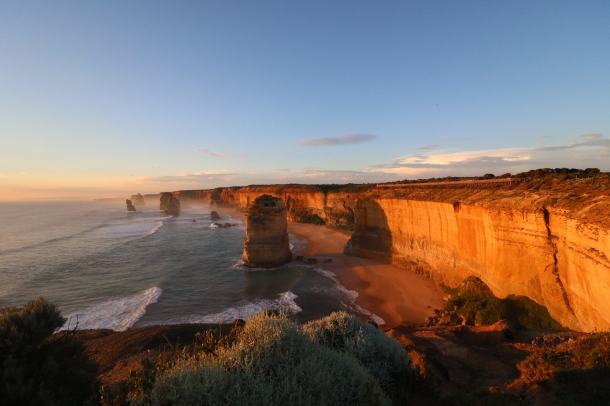 As the skies darkened we returned to camp and quickly realised leg of Sven is a mosquito delicacy. They just can’t get enough! Despite not using any lights, and cooking in the kitchenette rather than out the back of the camper we ended up with a van full! Pesky buggers kept us up all night buzzing around our heads and poor Sven was covered in red welts by the morning. First on the list for today is bug spray, yeulch!!

Just a normal girl who likes to try new things, go on adventures, spend time with fun people and tell stories...which is how this blog came about really!
View all posts by LilMissKaty »
← Great Ocean Road in a Jucy camper…let’s go!
Jucy “El Cheapo” camper: A review →